Germany Came to Terms with Its Nazi Past. Why Can’t America Do the Same with Slavery? by Jason Kottke
Monday June 7th, 2021 at 10:06 PM

For the Washington Post, Michele Norris wonders what it will take for the US to finally and fully acknowledge its history of slavery.

America experienced 246 years of slavery before it was officially ended with the passage of the 13th Amendment. That was followed by decades of legal segregation and oppression under Jim Crow, followed by a period of willful blindness and denial. A tourist from a foreign land might well conclude that the Confederacy had actually won the Civil War, based on the number of monuments, buildings and boulevards still named for heroes of its defeated army. The real truth of our shared history was a casualty of that war and, like any wound left untended, the results can be catastrophic.

A full accounting of slavery is one of terror and trauma, and for decades the natural inclination was to ask, why would anyone want to claim that history? But at a moment when the United States is dangerously divided, when we are having bitter and overdue conversations about policing, inequality and voting rights, when marauders fueled by white-nationalist rhetoric can overwhelm the Capitol, proudly waving the Confederate battle flag, the more important question is this: What happens if we don’t?

She uses Germany’s remembrance and examination of Nazism and the Holocaust as an example of a country that has properly faced up to its terrible past in order to move fully forward.

Vergangenheitsaufarbeitung refers to Germany’s efforts to interrogate the horrors of the Holocaust and the rise of Nazism. It has been a decades-long exercise, beginning in the 1960s, to examine, analyze and ultimately learn to live with an evil chapter through monuments, teachings, art, architecture, protocols and public policy. The country looks at its Nazi past by consistently, almost obsessively, memorializing the victims of that murderous era, so much so that it is now a central feature of the nation’s cultural landscape. The ethos of this campaign is “never forget.”

I visited Germany back in 2018 and its efforts to engage with past horrors were quite noticeable and stood in stark contrast to American activity along similar lines.

In particular, as a nation the US has never properly come to terms with the horrors it inflicted on African Americans and Native Americans. We build monuments to Confederate soldiers but very few to the millions enslaved and murdered. Our country committed genocide against native peoples, herded them onto reservations like cattle, and we’re still denying them the right to vote.

As Norris convincingly argues, “it is long past time to face where truth can take us”.

While at the the Taipei Zoo (previously), visitor Audi Yu captured this lovely footage of a thoughtful giant tortoise at gently helping an overturned terrapin get back on his feet. Once accomplished, however, the two tortoises walked away like nothing ever happened.

Opening an Internet time capsule—Internet in a Box for Win95 by Sean Gallagher
Saturday October 18th, 2014 at 12:45 PM 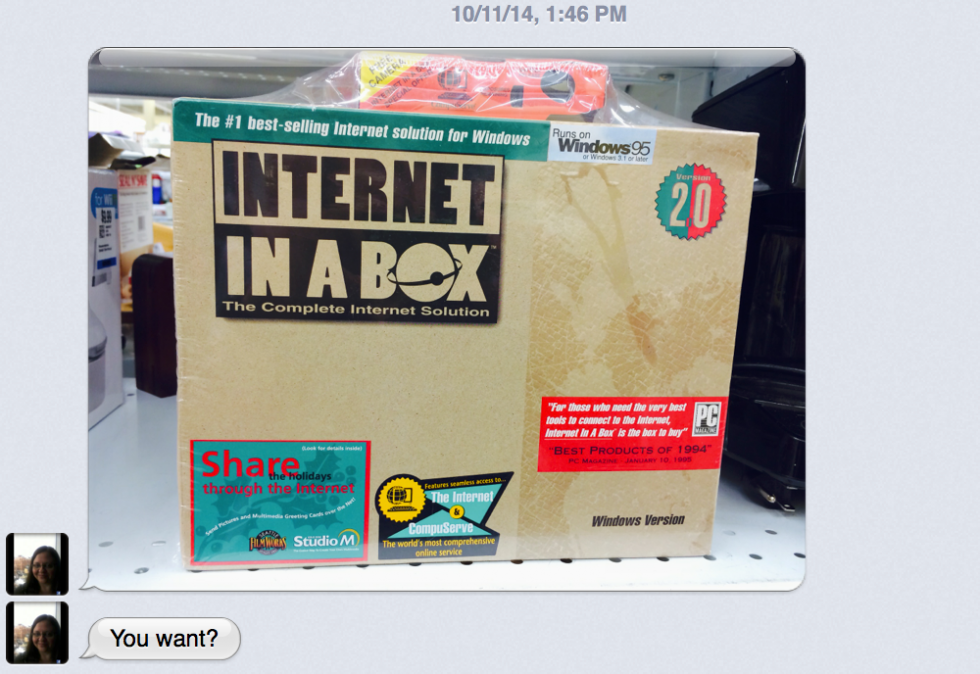 How could I refuse?

A few days ago, my wife messaged me a photo from a thrift shop with the question, "You want?" The picture was of a box of software still in shrinkwrap—SPRY Inc.'s Internet in a Box for Windows 95.

The answer was an obvious "OMG YES." I reviewed Internet in a Box back in 1993 when it was first released as an early adopter of independent local Internet dialup (using David Troy's Toad.Net). I spent endless hours connected with the software and my very first laptop PC, pulling down Hubble Telescope images from the Space Telescope Science Institute's Gopher server and raging at Usenet posts. Just the sight of the logo caused a wave of nostalgia to wash over me. It was a simpler time, a somewhat less user-friendly time. CompuServe was still a thing.

This particular box of software was, however, especially endearing. I used version 1.0 for several years before Toad.Net partnered with Covad and ran one of Baltimore's very first DSL connections into my house—allowing me to give up the dual ISDN connection I had for my connection to my employer. This was a bundle designed to bring the masses to the Internet, along with their photos, in 1995. Attached to the box was a Seattle FilmWorks one-use 35mm film camera, emblazoned with the CompuServe logo.

Battle Creek, Michigan Math Professor Critiques an Email Sent to Him From a Student Who Missed Class by Justin Page
Tuesday September 16th, 2014 at 8:39 AM

Marcus Anderson, a math professor at Kellogg Community College in Battle Creek, Michigan, recently created a video where he critiques an email sent to him from one of his students. The student, whose email address starts off with “cartmanrulez99″, writes to the professor as if he is a best friend for life, drops a winky face, uses shortcuts when spelling out words (u, lol, and thx), requests handouts for each of the four classes missed, and then goes ahead and asks for the actual class book.

YouTube Host Craig Benzine Uses 1,000th Video to Propose to His Girlfriend by Glen Tickle
Tuesday September 16th, 2014 at 8:24 AM

Craig Benzine hosts the Mental Floss show The Big Question and operates the YouTube channel WheezyWaiter. Benzine used the 1,000th video on that channel to propose to his girlfriend. He began the process three months ago by using the first letters in the titles of his last 20 videos (including the 1,000th) to spell out “Chyna Will You Marry Me?”